I had the incredible pleasure last week of being invited to Skype (yes, I am using it as a verb) with rising talent, classical guitarist Mattias Jacobsson.

The New York-based Swedish guitarist has just made his recording debut with the release of his first album Invocación. He took some time out of this busy practice schedule to share with me – and you! – his thoughts and ideas behind the album and a little of what makes Mattias Jacobsson, the man and the guitarist, tick.

Who is Mattias Jacobsson?

Mattias was born near Stockholm, Sweden and started playing guitar – like I’m sure a number of us did – at the age of seven picking up a guitar a friend’s house, gradually prising the guitar from his friend’s clutches, with grand visions of being a rock star.

That early passion for the guitar and music soon translated into something a lot more channelled and focussed when he begged his parents for lessons and managed to enroll at his local music school (the Nacka Municipal School of Music).

It was at this school that Jacobsson became truly passionate about the guitar.

“Gradually through those lessons, I realised that – wow! – classical music is something that really speaks to me. And the reason for that happening, I think, was pure chance because the teacher I landed happened to be a sort of pioneering figure in the Swedish guitar world. He was a student of Eduardo Sainz de la Maza in Barcelona, before there was established guitar teaching in Sweden. It’s completely because of him, Erik Möllerström, that I even discovered classical music.”

Following his recital debut at age 17, Mattias then went on to study at the Malmö Academy of Music, following that up with study at the Juilliard School in New York with Sharon Isbin. Not too shabby eh?! His guitar of choice is not too shabby either, choosing to play and record with a 1971 Ignacio Fleta e hijos guitar.

Invocación, a new light on Tarrega

Invocación is produced by Grammy Award-winner David Frost, released by Avie Records and provides Mattias’ unique perspective on Francisco Tárrega – showing his influence from Chopin. This is a connection I’d previously not really made, and a connection which doesn’t get much discussion at all.

Much to Mattias’ credit, Invocación has been named Gramophone Choice in the September issue of Gramophone Magazine, and chosen as CD of the Week by Classic FM. Mattias was also featured in a cover story in the June issue of Classical Guitar Magazine.

A lot of thought and care has gone into making this album. Mattias’ inspiration for his recording debut comes from a long-held love affair with the Valencian guitarist-composer.

“Personally to me Tárrega has always spoken to me, it has always appealed to me very much, so that always felt like a natural centre.”

Whilst Mattias was growing up playing and practicing Tárrega works, he was doing so whilst “always having Chopin in my CD player….loving it every bit as much as everything I had been playing“. He soon began to make the connections between the two composers.

“When I was 10 years old and learning Adelita I didn’t know what a mazurka was or that that was even called a mazurka or why Tárrega was writing a mazurka in Spain, you know. I gradually realised more and more how much Tárrega was inspired by Chopin. ”

Mattias notes, however, that he hasn’t really heard anyone make that connection in recent times or say “look guys Tárrega was really inspired by Chopin”.

Jacobsson makes the point that Pujol had made the connection between the two composers in his biography of Tárrega, but feels that it is time to restate the influence that Chopin had on Tárrega once again. I concur that this connection between the maestri of the Romantic piano and Romantic guitar, brings a refreshingly different point of view and reflection point on works we hear so frequently. 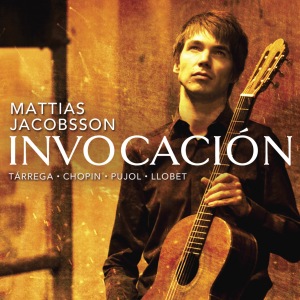 Mattias was initially somewhat reluctant to record and release an album focussed on the works of Tárrega. This reluctance stemmed from the fact that this part of the classical guitar the repertoire is, in the kindest terms, rather well-known (or in perhaps unkind terms, overplayed).

“I thought, who cares?!” said Jacobsson. “I love it and I hope that will come across. And also show it in the light of the Chopin; it adds a different dimension to it.”

I admittedly had similar ambivalence when I first saw the album cover – “what?! More Tárrega “, I thought…. Hmmm…..However, when one sees the track listing and listens to the quality of the playing it’s apparent that there is more than meets the eye – and that one shouldn’t necessarily make assumptions!

The stand-out tracks for me on the album are the Capricho Arabe and Tarrega’s transcription (with a bit of Jacobsson editorial magic) of Chopin’s Prelude No. 15 “Raindrop”.

In the Capricho Arabe the choice of tempo feels really spot-on – just like Goldilocks supping on baby bear’s porridge, it’s just right. Too often the Capricho Arabe gets played at too fast a tempo that detracts from the true flavour of the piece (in my very humble opinion!)

Mattias’ tempo here really allows the music to speak for itself, without dominating it. As does his musical phrasing. He plays with a lightly directed touch, great clarity and precision. His playing is not overly schmaltzy, but not too directly straightforward. Just the right amount of sugar sprinkled on top. Mmmm mmmmm.

Apparently, Mattias originally wasn’t going to include the Chopin Raindrop Prelude on the album, but I’m blooming glad he did. It’s really stunning and a transcription that works fantastically well on the guitar, particularly given it’s such a well-known and quintessentially pianistic piece of music. This is part of the reason Mattias was initially reluctant to include it on the album.

But it works so very well. Again he uses just the right touch to convey the spirit of the piece, sounding at once pianistic and guitaristic in its style. The pianistic quality comes from Mattias’ approach to editing. He, of course, initially based his approach on the Tárrega transcription.

The Tárrega version is fairly sparse and pared down from the original piano score, however, to facilitate easier playing on the guitar. Mattias, not overly happy with the scant sound of this version alone, also consulted the original piano score and essentially added most, if not all, of the notes back in. This results in some crazy left hand finger gymnastics and insane contortions, but it sounds awesome! Well worth playing finger twister for its effects I say!

If you want to check out some wee snippets of the album head here: http://invocacion.tumblr.com/listen

Check out some of his sweet playing here:

So what’s next for Mattias?

Mattias is currently preparing for the Uppsala International Guitar Festival in October, where he’ll showcase the new album (head along if you’re in Sweden then!). He’s also polishing up his rendering of Boccherini’s Fandango for the occasion.

In addition to the Uppsala International Guitar Festival in October, Mattias is also preparing for a concert at Strathmore in Maryland, USA in early 2013.

He is also preparing a version of Domeniconi’s Koyunbaba – again, in spite of it being playing by every guitarist and his dog! However, he felt that he could now offer something slightly different and bring something of himself of the piece, as well as having a lot of fun with the tuning whilst practicing it. “After playing it (Koyunbaba) every other tuning in the guitar seems not as effective. Now I wish everything could be played in an open C# minor tuning!

Jacobsson also thinks that now could be the right time for him to start working on Britten’s Nocturnal “it’s another one of those pieces. I hold it in such awe“.

Obviously happy to be rather a busy-bee, Mattias is also currently working on a guitar concerto, which is still a work-in-progress, with composer Jakub Ciupiński. “I feel really very honoured and very happy to be part of that process. It’s really flattering“.

Receiving drafts of various parts of the work and being involved in the compositional process, he likens to being fitted up for a new suit at the tailors – the tailor knows the overall structure and make-up of the suit, but the wearer can help decide on which little tweaks here or there to make the final fitting just so.

Mattias has some excellent advice for those learning the guitar, or thinking of picking up the guitar for the first time. It’s advice that I would agree whole-heartedly with too.

His advice is “to enjoy it, and to not feel that it’s something they have to do and practice all day long, but to enjoy it and to create themselves on the guitar.”

Mattias advocates that instead of just sitting in front of sheet music all the time, learning a piece that you perhaps may not understand or that doesn’t really speak to you, aspiring guitarists should also try their hand at arranging their favourite pop song or improvising and translating your emotions onto the guitar.

He’s a strong advocate of playing with others too, playing with your friends, perhaps “arranging a Lady Gaga song for two guitars” (that would sound sweet – Alejandro for classical guitar!). “If one has those kind of ideals and things to work towards, the technique will come, rather than the other way around. I think it will at least sound more inspired. The audience want to hear whether the emotions are coming through.”

Jacobsson is a man after my own heart in terms of his “guitar hero”, to coin a phrase, which is unequivocally, Julian Bream. He admires Bream for his ability to communicate with the music he played and in developing the repertoire.

“I think Bream is always spot on musically. I really admire his courage in playing the guitar at that time in England and how he really created a 20th century repertoire for the guitar. Today it’s not even modern, it’s just great music and it all came from him. And he has such enthusiasm and energy for everything he does, and it’s for that reason he’s my biggest inspiration on the guitar.”

When not practicing, playing or recording Mattias enjoys listening to and drawing inspiration from a veritable smörgåsbord (to use a Swedish analogy) of music – cellist Bernard Greenhouse, violinists Arnold Steinhardt and Itzhak Perlman, Arthur Rubinstein’s Chopin recordings, and Spanish pianist Alicia de Larrocha (“I can listen to her playing for hours and hours and hours, non-stop”).

Swedish tenor Jussi Björling is somewhat of a hero for him (“definitely on par with any great singer that ever lived….he has something in his voice that really speaks to me”), Bjork, he doesn’t mind a bit of Lady Gaga, and is also a self-confessed Radiohead fan “I’ve been listening a lot lately to Hail To The Thief” (nice choice Mattias, although I’m a fan of the Kid A album myself). He likes the way that Radiohead do “all these crazy things” with their music, and have millions and millions of fans. He makes the point though, that when classical composers try to do the same, people say “oh no, you can’t do that”, it tends to drive people away – are we missing something here?!

When really kicking back Mattias likes nothing better than hanging out with friends and drinking coffee. He’d certainly enjoy Melbourne in that case! Mattias doesn’t have any plans at present to come to the Land Down Under, but said he’d “love to go to Australia so much!” I can hardly wait until he does! Come on over Mattias!

Invocacion is out now on Avie Records, and available for download on iTunes and Spotify.

And here’s a wee taster of the album for you…….