Bryan Baker is the kind of artist that I really admire – the music, good music, comes above all else. The boundaries of genre are no boundaries at all, merely marker posts into a slightly different fork in the road. Bryan Baker is the kind of guitarist that I really admire too – equally at ease rocking out on the electric axe as he is with noodling on some Bach-inspired fugue on his nylon string classical guitar. He cross-fertilises, references and draws inspiration from all manner of styles in his evidently virtuosic playing and mature and progressive musical writing.

If you’re not aware of Bryan Baker, he has been building up a loyal and ever-growing fan base over the last fourteen years gradually, playing and eclectic blend of jazz and improvisational arts, electronic sensibilities and production techniques, classical composition, rock, blues, and innumerable other influences.

Baker’s latest album, which is his fifth solo outing, is his first foray into the world of writing for classical guitar. But don’t think for one minute that this is some lame-ass crossover album – it ain’t. Baker has quite clear command of the idiosyncrasies of the classical guitar and how to write well thought out, yet expressive contemporary music with well-developed, passion imbued musical ideas.

In listening to the eight variations making up The Lacuna Variations I was often reminded of the work of Leo Brouwer (the start of Three is very reminiscent of Cuban Landscapes with Rain) and Toru Takemitsu (the whole thing had a bit of a In The Woods vibe for me). For me, this is the very sort of writing I love (and would love to hear more of) for the contemporary classical guitar.

The Lacuna Variations was composed by Bryan on a two year sabbatical in Seville, Spain and throughout Italy for the past two years where he was working and performing with various artists. The album is clearly has many musical influences and inspirations, from Bartok, Messien and Shostakovich to Bach, Chopin and Steve Reich, while simultaneously employing Bryan’s own inimitable styling.

The pure sound of Baker’s guitar is joined in some of the variations by the introduction of effects such as delays (a la Nigel Westlake’s Hinchinbrook Riffs) and loops. These effects are not really effects though per se – they are not covering up, or “adding a cherry on top” of the music, they are brought in to add to, to add another layer on top of and to vary the musical material in rather interesting ways. A great use of the guitar with contemporary music technologies to benefit the music, it’s “feel” and musical direction.

My favourite of the eight variations is Three. This is one of the longest of the variations and winds it’s way on a fantastic auditory journey, starting out very simply with a gentle, pulsing one note repetition. This builds into some delightfully angular sounding arpeggios, before moving into a faster jazzy, Spanish-inflected quasi-melody, which itself then gives way to a slower more introspective melody and Bach-esque, jazz-infused exploration. I really like Bryan’s use of colour and dynamics in this variation too. He’s not not afraid to give the guitar a bit of welly when required, but is equally at home with the lightest and deftest of touch in response.

The album is due for release around mid-December (watch this space for further details) and I highly recommend it if you want to listen to some of the most interesting contemporary classical guitar writing and performance.

And That’s Not All – Here’s A Q&A With The Man Himself, Bryan Baker!

You’re about to release your fantastic new classical guitar album “The Lacuna Variations” – what was the inspiration for coming up with the album? Who or what are you main influences in your writing?

My inspiration was largely based in a desire to, for lack of a better term, “reconnect” with the foundations and roots of my instrument. Having spent the large majority of the past 7 years progressively stacking more processing, power, energy and volume into my music, I felt an almost existential need to strip away each and every element clogging the pure connection with my guitar, something I felt that I had lost to a certain extent. The raw, poetic simplicity of the classical guitar was the first inspiration that came to me, and one that also allowed me to reconnect with my roots, having begun my musical career playing classical music as a child.

In terms of inspiration, guitaristically, Villa-Lobos has always been central to my music, as well as Julian Bream, and the music featured on this album is no exception. Outside of the realm of guitar, Shostakovich was a major beacon of inspiration, as well as Satie.

Can you tell us a bit about the recording process? Did you enjoy it? What were you favourite parts of the process? And the least favourite? How long did it take you all up?

The recording process was a rather lengthy one, as I’ve always felt classical guitar albums, or any solo guitar recording for that matter, are so indicative of a moment, an emotion, a mood, that it can tend to take multiple days or weeks to find “that” recording that rises above all others. With this concept in mind, we recorded each song on the album individually until I was completely satisfied with a particular version, then would move on to the next song, with the total recording time taking roughly  6 weeks until I was happy with the overall result. I certainly enjoyed it. I love recording. Unless I’m not playing well, then I hate it! Haha! My least favorite moments are always the same; bad days. They happen, as we’re all human, however they can, and often times do, frustrate the absolute hell out of me! Luckily, this album was almost effortless, as many of the pieces seemed to simply flow with an energy all their own.

What is your favourite track on the album and why?

I’m very partial to “Two”, as it is one of those mysterious, seemingly god-given compositions that came to me while on the Subway, which I then composed in 15 minutes and recorded the same day. I love its simplicity and simultaneous twists and turns, and I love playing it live. It just sits so beautifully on the instrument, allowing each of the guitar’s sonorities and timbres to ring and breathe.

What “lessons learnt” did you take from the process of making the album?

Simple: I need to carry more nail files on me! I was always with a snag and without a file!

The number of times either I or someone was running to the convenience store for nail files was absurd.

Have you written any other work for classical guitar? Any plans to write more for the instrument?

As of yet, no. However, I certainly plan on doing much, much more, as I truly feel I’ve found a connection with this particular application for the guitar that exceeds any of my past.

Addtionally, I feel that the idiom of classical guitar music is a wholly under discovered area of music, and something I see and hear tremendous potential for, both within more traditional settings, as well as outside of them. So, yes. More to come, certainly.

What else are you working on at the moment? What else can we expect to see and hear from Bryan Baker in the next year or so?

My main focus is to perform and tour the music featured on “The Lacuna Variations” as much as humanly possible, wherever, whenever and however, in addition to masterclasses and clinics coinciding with performances. Other than that, I’ll be recording an album of electric/post-rock improvisational music with long-time friend and bassist extraordinaire Giacomo Merega and drummer Paul Kaiser later in the year, as well as an acoustic project in Amsterdam this summer, but this music will remain my main focus.

What music (both to play and to listen to) excites you the most and why?

I devour music of all types constantly. I probably buy roughly 7-10 albums per week from a panoramic range of artists. As of late, I’ve been listening heavily to “The Complete RCA Album Collection” by Julian Bream, “Lost” by Trentemoller, “No Better Time Than Now” by Shigeto, “Leverage Models” by Leverage Models, “Siberia” by Polvo, “Virgins” by Tim Hecker, “Nothing” by Meshhuggah, Jeremy Denk’s recently released version of Bach’s “Goldberg Variations” as well as his album of Beethoven and Ligeti music, “Engravings” by Forest Swords, and honestly many, many others.

Which guitarists do you find the most inspiring or exciting? And other musicians? 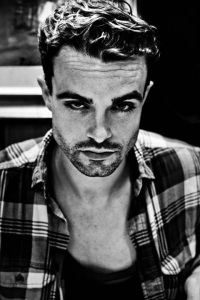 In terms of guitarists, classically speaking, not a soul compares with Julian Bream, in my opinion. I love his playing because it’s imperfect, and that makes it perfect, human, emotive, real. I don’t feel the same response to Parkening, Segovia, Williams and others as I do to Bream.

Non-classically, wow, hmmmmmm… David Tronzo certainly, as well as Marc Ribot. John Shannon is a peer and friend who is also paving new roads on the acoustic guitar (steel string) who happens to live in Australia currently as well.  Ryan Scott is an electric guitarist in NYC who’s very talented. There are simply too many… Haha

Outside of guitarists? Ha! Impossible… Can I say “all of music”? Is that a valid response? Because, in reality, everything does sort of inspire me. I just try to stay as open as possible and let it all in.

When you’re not practicing, playing and writing what do you get up to?

I love to cook, and have also studied the culinary arts quite extensively. I have an Italian fiance, so she keeps me on my toes quite effectively in terms of my quality control. Other than that, I love a good book, especially the more philosophically slanted, and generally read a book a week or so. I jog daily, hike, bike, whatever to keep the blood flowing as well.

What are your top tips for someone currently learning or thinking of learning the guitar?

Be yourself. Do not think or do something because it has been told to you. Act based on emotion and instinct, allowing your intellect to inform, but never guide your music. This way, you create “your” music, allowing us all to benefit from your originality and dedication.

Finally, do you have any plans to head Down Under? We’d love to see you here in Australia!

I’d love to come! It’s been too long! Hopefully this album takes me back to Australia. Love it there!