Frequent readers of the blog will most likely be aware of the young, rising Melburnian talent that is Daniel Nistico. If not, or if you’re new to these parts, check out these posts on Mr Nistico:

Well, Daniel has been in the recording studio recently recording his debut album (financed all through a Pledge Music project). And what a debut recording it is. I promise, cross my heart, hope to die and all that, dear reader, that I’m not just saying that because I know the chap – this is a truly fantastic recording and has been playing on heavy rotation here at Classical Guitar n Stuff Towers for the last few weeks. 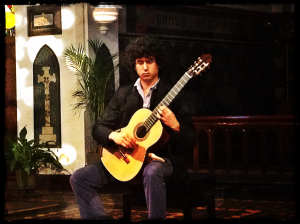 First up, the playing right across the album is just superb – yes, Daniel’s weapon of choice is a rather tasty Greg Smallman guitar, but he has the talent (and more) to match a guitar of this calibre. His tone is personally very inspirational for me, and I urge you to take a listen to understand what a good clear, full, fat tone without the slightest element of schmaltz creeping in really sounds like.

Daniel has put together a fantastic programme, with some well-known favourites on there as well as some lesser known material – a good balance between the two in fact, in my opinion.

The album opens with some cracking Barrios – the Mazurka Appassionata – and a simply beautiful rendition of the full Le Catedral suite. The fifth track on the album is the absolute stand-out for me and this is Daniel’s own transcription and interpretation of Sevilla by Albeniz – I love this!! Yes, it’s a well-worn favourite, but Daniel’s interpretation brings a quality that I’ve not heard in many recordings. It’s rather laid-back, unhurried, unfussy and the lines, voices and phrasing within the music are so very clear. I’m not sure of Daniel’s approach to this piece, but it feels almost like a guitarist’s interpretation of a pianist’s interpretation of guitar music. I love it! I may even be so bold as to say this is currently my favourite recorded version of Sevilla. Nice work Daniel!

Continuing on with the Spanish flavour, but with a slightly more contemporary feel is the Collectici Intim suite by Vicente Asenci (written in 1965), showcasing Daniel’s virtuosic flair as well his gorgeous rounded tone, and fantastic sense of phrasing (check out in particular IV La Gaubanca).

Moving away from Spain, Daniel brings us home to Australia with Phillip Houghton’s Kinkachoo I Love You. This lovely, mellow piece is a lovely choice in the programme to follow the rapid fire final movement of the Asenci suite.

The album is then rounded out with two absolutely stunning pieces (two that I’ll admit I’d not heard of prior to listening to this recording) and come joint second favourite for me after Sevilla. These pieces are Sonatina….after an enchantress by American composer John Anthony Lennon and the exquisite This morning in Omagh the sun rose again by William Lovelady. This piece was written as a tribute to the 29 people that lost their lives and 220 that were injured in the 1998 car-bombing in Omagh, Northern Ireland. Daniel’s suitably impassioned playing on this piece is very sensitive to the inspiration for this piece and is quite simply beautiful. Actually on reflection, this one is joint favourite for me alongside Sevilla. I’ve just had the privilege this evening (I’m writing this on Sunday night) of having just seen Daniel perform this live this evening in Melbourne. Breathtaking…….

This album is a must if you’re a lover of guitar music, and looking to broaden your horizons with some newer or little-heard repertoire. Hop onto Daniel’s website for details of how to get your mitts on your own copy of his album. It’s a must!!

And watch this space for a Q&A with Daniel before he heads off Stateside to continue his studies and grow his career at the Eastman School of Music.

I had the enormous pleasure a couple of weeks ago to meet up and chew the fat with Dan McKay and Antony Field of Duo 19. These guys, highly respected and well-loved figures on the Melburnian and Australian classical guitar scene, released their first recording, Fluid Lines, back in April last year (check out the review here). We had such a fantastically awesome, in-depth chat that I’m splitting it across two posts – lucky you reader!

So I took the opportunity to head over to the north of Melbourne, where Dan and Antony both live (and incidentally have taken the name for the duo from the no. 19 tram line which runs through their suburb into the heart of the city), and have a bit of a chinwag about what they’ve been up to, what their plans are for 2013 and how life is treating them. Here’s what we got up too…

Antony and Dan had known each other for a long time before actually formally coming together as Duo 19. They started playing just a piece here, a piece there for a couple of years, learning things for Antony’s masters recitals, the occasional classical guitar society event, some Frederick Hand and Andrew York pieces. Before they came together as a duo they had a long musical background and association with one another – friends, teaching for one another, playing pieces here and there, hanging out. So it was fairly natural that they would play together at some point.

The first full-length concerts they played as a duo was one of Ken Murray’s Guitar Perspectives concerts here in Melbourne, roughly two years ago. Coming out of that it was then that first spoke about making a recording. A lengthy, but very natural and organic gestation.

“Kind of the way you want a musical collaboration to happen in a way. It just sort of happened. Kind of nice.” (Antony)

Antony used to pass through Canberra on the odd occasion when Dan was still studying there, with Dan actually receiving a masterclass from Antony in one instance. “A hugely influence masterclass, that had a massive effect on me” said McKay rather tongue in cheek, “Yeah right, pulling my leg there” was Field’s response, with considerable giggles and boyish grins on faces ensuing!

And their approach to recording Fluid Lines was similar to that of their coming together as a duo – recording of a piece here and there, a fairly relaxed style until they had the whole album together. All in all it took them about 12 months to get all the tracks down and a further 6 months to get them all mastered, finalised and ready for release. Dan quipped that may be the next one will be even quicker!

The guys are working on a Rodrigo’s Concerto Madrigal for two guitars currently and hoping to do that with an orchestra at some point. They’ve also been working recently with Michael Avery on a video clip, hopefully to be finished in the next month or so, as a bit of a “calling card”.

They’ve also started throwing ideas around for their next recording, “some more modern, minimalist type of pieces in the Hinchinbrook (Riffs) style of piece”  says Dan.  Being backed up quickly by Antony confirming that they “dont want to do the same old kind of pieces. We like to do things that are a bit more aligned to where we are as people and musicians.” These guys are not up for cracking out an old standard of the repertoire just because they have a gig coming up. They are true explorers of the instrument and their viewpoint is summed up well by Antony when he says that “the world needs more interesting things, you know!”

Doing more interesting collaborations with composers, stuff like bring in turntables, tape and other objects and instruments into the performance situation also appeals to the duo. They’re really looking to push into unchartered water. So watch this space for some wiki-wiki-can-I-get-a-rewind classical guitar action from these guys soon. Hah hah!

They do recognise the need, however, to strike the balance between providing difficulty and challenge for themselves as players, interest to the listening audience and accessibility for those that may not be too familiar or comfortable with “non-standard” repertoire and grab people in.

Antony is also keen to point out that “I don’t buy the whole ‘ah yeah, let’s just do that’ thing”.

“At the same time, you’ve got to play something”  counters Dan, with the two agreeing that it’s about striking the right balance.

As one may expect from two musicians who are into exploring the music that they play and create on their instruments, their listening tastes are fantastically eclectic too.

Dan’s favourites include The Beatles, The Band, Radiohead (particularly the In Rainbows album), Sigur Ros, King Crimson, Frank Zappa, Tom Waits, and most recently US hip hop duo Death Grips. From the classical repertoire Dan loves the French composers Debussy, Satie, Ravel as well as Bach. Dan says he likes to take a whole bunch of vinyl records out to his shed out back that he can’t play in the house as he knows his kids will hate it, his wife will hate it, heck maybe even he will hate it, and just sit and listen and give some totally different stuff a spin. Guitar-wise Dan finds himself listening mostly to Alirio Diaz, Julian Bream and Segovia.

Antony’s tastes include Queen (good man – this is my own latest musical obsession!) and Joni Mitchell. He describes himself as more of a functional listener, digging into the music and sounds of a particular artist or composer when starting a particular project featuring their music perhaps.

Antony likes to listen to a lot of guitar music, checking out the various ways in which different players approach the same music. He finds this assists him in his teaching too, “I like the research approach and being as informed as I can.” Most recently he’s listening been listening to guitarist Alieksey Aianna, who was out in Australia last year.

That’s all for today folks! Check back in next week for part two of the interview with Dan and Antony’s views on the guitarists they most admire, and their top tips for guitar students.