It has to be said that I’m a very lucky bunny indeed – another fantastic classical guitar album to review (and yes it was fantastic – and just as an aside, I only tend to post up reviews if I really like a recording as I like to keep things positive on here and prefer to expend my efforts in telling you about the stuff that floats my boat and I think is worth a listen).

And this recording, Serene Nights, the sixth by Australian guitar family quartet Guitar Trek (guitar family being a bass, baritone, standard, and treble). The quartet, comprised of Timothy Kain, Minh Le Hoang, Matt Withers and Bradley Kunda, have produced what is a really refreshing recording.

And when I say refreshing I mean music that you perhaps wouldn’t ordinarily connect with the classical guitar or perhaps even have imagined it on the instrument previously. For example, we’re treated to a couple of excellent Johannes Brahms transcriptions (Intermezzo, Op.118 No. 2 (arranged by Bradley Kunda) and the Horn Trio in E Flat Major Op.40: IV – Allegro con Brio)- not a composer I’d usually connect with the guitar at all, but a great composer and both of these pieces certainly work very well with the guitar family. Brilliant stuff (and goes without saying almost expertly played by the four guitarists).

The album title Serene Nights, out now on the ABC Classics label, is a pretty accurate one, for whilst there are some lively pieces on here (including impressively lively album opener Llanura by Alfonso Montes) the abiding sensation, for me, delivered by this recording is one of poise and grace.

Being a bit of a ballet fan, I have to say that my personal favourite on the recording is the an Andrew York arrangement of Waltz of the Flowers from Tchaikovsky’s The Nutcracker. A cracking arrangement, and expertly played, full of joie de vivre, fluid and nuanced. The colours and dynamics that the quartet bring out in the piece demonstrate the versatility of the instrument family, and the masterful command of the instruments that these four players have. We rarely hear Tchaikovsky on guitar and this recording goes to show it can work really well indeed.

This is followed a wonderfully sultry rendition of Albeniz’s Tango (Op. 165 , No. 2), as arranged by Timothy Kain, brining the mood back into serene territory again following the lively excitement of the Tchaikovsky. Very lullaby-esque. Beautiful arrangement, beautiful playing.

For the romantics amongst you you might want to check out the Alfonsina e el mar (Ariel Ramirez, arr. Roland Dyens) – achingly beautiful melody, supported by some big, fat rich sound. The baritone guitar really plays a great part in this piece, demonstrating how the guitar family can bring an important dimension that a straight-up guitar quartet can’t quite manage.

Then for a bit of a change of pace with latin flavour and colour (with a steel strung guitar thrown into the mix) we’re presented with Noite Serena (Bau (Rafino Almeida)) followed by a Timothy Kain arrangement of Nola for a little bit a whimsical touch. We then head into Mark Issac’s Angel and a Kain arrangement of Satie’s Je Te Veux, both of which have a lovely, easy relaxed vibe to them.

My second favourite offering on the recording are all four of the Four Pieces for Piano by Rodrigo (arr. Timothy Kain), proving yet again the piano to guitar leap works very well indeed. My particular favourite of the four is the third movement (Plegaria de la Infanta de Castilla). Once again the richness that the baritone brings to the piece is particularly noteworthy.

The recording is closed out by a Jeremy Sparks arrangement of Joplin’s Solace. A lovely, and most definitely serene, closing to a fine recording.

Serene Nights is a high-class affair – high calibre playing with some top notch “in house” arrangements of some wonderful pieces of music that sit very well on the guitar family (testament to talented, sensitive and balanced arranging skills). An expertly played and wonderfully colourful exploration.

Serene Nights is available to buy now at all good record stores, including ABC stores and the usual online outlets. 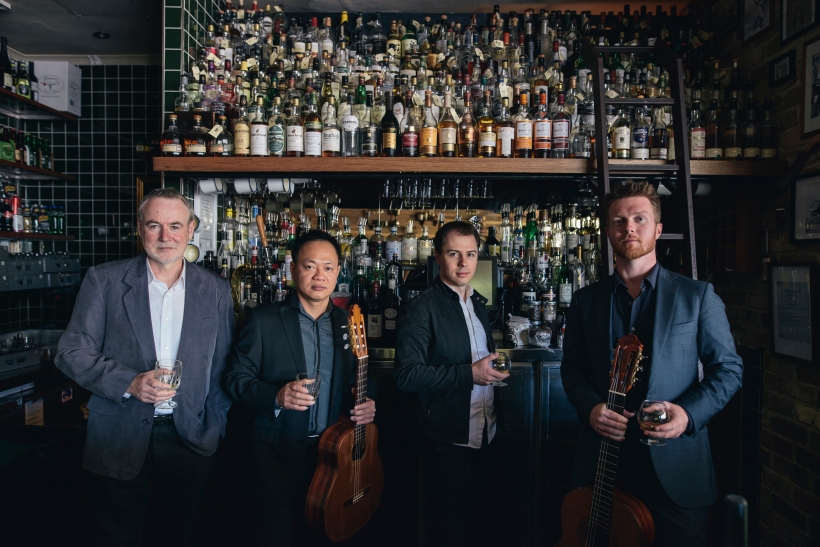 Serene Nights – a recording worth celebrating!