Today’s post wraps up the three part series that the marvellous Rick Alexander has kindly written – thanks Rick.

The first post was on getting your set-up right for recording.

And the second was on microphone positioning.

In this final post of this series Rick talks about USB audio interfaces and audio software.

You need an audio interface to convert the analog signal from the mic to digital. Sometimes this conversion job will be done in the mic itself (as in USB mics which have a USB output). But the most common solution is to use an audio interface box which has microphone inputs and a USB connection to a computer or tablet. For playback, audio interfaces also have audio outputs for connecting to an amplifier and speakers, plus a headphone output.

You can get audio interfaces with varying numbers of microphone inputs from one upwards. Two mic inputs are common and I’d recommend this combination so you can do stereo recording.

Also, make sure that the audio interface provides “phantom power” for powering condenser microphones. Almost all audio interfaces will have this. http://en.wikipedia.org/wiki/Phantom_power

M-Audio: E.g. the M-Track Plus http://www.sweetwater.com/store/detail/MTrackPlus US$79

Recording to a tablet using a digital audio interface

Recently audio interfaces which work with a tablet have come out. Recording to a tablet rather than computer has the advantage that the tablet won’t generate fan or hard disk noise.

E.g. the PreSonus Audio Box i2 records to iPad as does the Avid Fast Track Duo listed above. http://www.sweetwater.com/store/detail/AudioBoxiTwo

Most audio interfaces will record a variety of bit depths and sampling rates. For the audio examples in this series I recorded with 24 bits per sample, 44100 samples per second.

It’s worth adjusting the input level control of the audio interface so that your recorded signal is close to full scale. I.e. you don’t want to be scaling up the signal too much after it’s been recorded.

An alternative to using an audio interface and computer is to use a stand-alone digital recorder to record (Figure 1) with the option of connecting external microphones for better sound quality (Figure 2). Also the computer can be turned off while recording so, as with recording to a tablet, you don’t need to worry about recording fan or hard disk noise.

Figure 1 – Set up for recording with a digital recorder 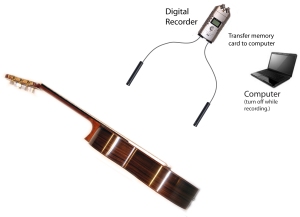 An example of a digital recorder is a Zoom H5: http://www.sweetwater.com/store/detail/H5 US$270

For my home recording I mostly use a computer based setup but I also used a Zoom H4 recorder with external KM184 microphones for two tracks on my latest CD.

A digital recorder is a useful part of your recording setup. For example, to test microphones you could take a digital recorder along to the store. I’ve taken my Zoom H4 along when testing guitars so I could compare the sound of various guitars later. Also, the Zoom H5 recorder can also be used directly as a USB audio interface. I.e. you can record via USB straight to a computer rather than the memory card in the recorder.

You’ll need audio software running on your computer or tablet. Audio interfaces often come with bundled software or alternatively you can get separate software which will work with any interface. A free example for stereo or multi-track recording is Audacity http://audacity.sourceforge.net/ . A cheap but fully featured multi-track recording program is Reaper: http://www.reaper.fm/ ($US 60 for non-commercial use.) I use Sony Sound Forge for solo recording and Reaper for recording overdubbed duets.

Up to this point we have a raw recording. The next steps in producing a finished track are to do some editing, possibly perform equalisation (EQ) to alter the frequency content, maybe apply dynamic range compression and add reverb.

I think that for a classical guitar recording performing the least EQ and compression is generally best. This is because ideally we want the guitar to sound 100% natural. But, unless you live in a concert hall, you’ll want to add reverb to a home recording. This can be done using audio software such as Audacity, Reaper or Sound Forge.

My final example audio is the stereo example with angled mics from part 2 of this series with a little reverb added using Sony Sound Forge’s “Acoustic Mirror” reverb. The Acoustic Mirror reverb in Sound Forge adds the reverb recorded from a real acoustic space to your recording. They provide a number of acoustic spaces with the program and here I’ve used a Masonic Centre at Madison, Wisconsin, USA.

And here’s the same track with reverb added.

You can gain a lot of enjoyment from home recording. It adds another dimension to your playing and is simply a lot of fun. And these days it doesn’t have to be too expensive.

I hope this series helps you, and if you have any questions feel free to post a comment.

Thank you for the opportunity to write this series Nicole!